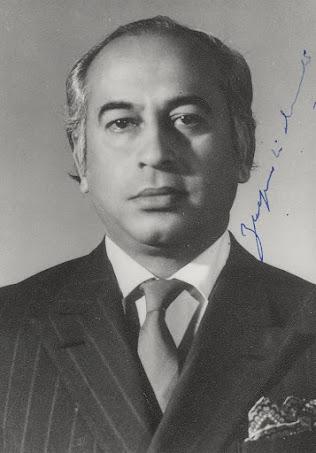 Zulfiqar Ali Bhutto was born on January 5, 1928 in Larkana and received his higher education from Bombay, California and Oxford University. After graduating, he started practising law in Karachi and teaching international law at SM Law College.

His fame soon reached government houses. In 1958, Ayub Khan included him in his cabinet as a minister. In 1963, he became the Foreign Minister of Pakistan. After assuming this position, a revolution took place in Pakistan’s foreign policy and Pakistan entered a new era of international relations.

In September 1965, he presented Pakistan’s position in the UN General Assembly. When President Ayub Khan signed the Tashkent Declaration in January 1966, Zulfiqar Ali Bhutto became disillusioned and split from the government the same year. On November 30, 1967, he formed a Pakistan People’s Party in Lahore

The basic thinking and philosophy with which Quaid-e-Awam Zulfiqar Ali Bhutto founded the PPP was to give priority to the rights of the people. Bhutto took up the cause of giving rights to the deprived, oppressed and backward sections of the society. It was Bhutto who spoke about the rights of the peasants.

The challenge is to make Pakistani mothers, sisters and daughters prisoners and keep them behind and rob them of their rights. Zulfiqar Ali Bhutto was the voice of the people of Pakistan.

To understand Mr. Bhutto, we need to take a look at his leadership abilities. I need and I should not waste my time in the Security Council … such an example is not found in any leader in the world. An incident is circulating in my mind and my heart is also wanting to narrate … US President John F. Kennedy during Bhutto’s visit to the US said that you are standing in the US White House. So Mr. Bhutto replied in an interesting way that unfortunately the floor of your White House is under my feet.

Regarding this, the American President said in a very serious manner that your intelligence impressed me if you were in America. Of course, if he had joined our cabinet, Bhutto would have said with a laugh

The achievements of Bhutto for Pakistan are not hidden from anyone. The 1973 constitution which gives legal status to the state system, giving identity cards to ordinary citizens and giving them national identity, giving passports to Pakistanis for trade and employment abroad. Opportunities to acquire, given ownership to farmers and laborers so that they can become free.

For the integrity of the country, the establishment of the Nuclear Atomic Board, the establishment of state institutions, the recovery of 90,000 troops from the India Treaty, their slogan has always been the same that providing food, clothing and shelter to the people will be the top priority of our government. ۔ Recently, in a TV program, well-known journalist Mr. Iftikhar Ahmed, while highlighting the ideological aspects of Mr. Bhutto, said that Mr. Bhutto had many qualities, the first of which was that when he first met someone.

So in the second meeting we used to call him by his name. The other great virtue was to consult every common man. When Bhutto was attacked in Multan, the students started throwing stones at the assailants.

Encourage them by embracing them by embracing them, but such an example is rare in our society. The example of PPP workers is considered important. From 1977 to 1979 and then in 1983 during the MRD movement, the party workers endured all kinds of oppression and even set themselves on fire by applying oil ?? Lena … I don’t think any political party in Pakistan has as many brave workers as the PPP. Those who can fight any kind of dictator are given examples in history.

Iftikhar Ahmed’s interesting point was that if Zulfiqar Ali Bhutto is to be understood, then first the intellectuals should openly discuss Bhutto’s animosity and from 1967 to 1977 A study of history will show what was happening in Pakistan in that decade. Bhutto did not support the secession of East Pakistan but read Bhutto’s statement in the Supreme Court in December 1978 so that the younger generation would understand that Bhutto In the matter of power, Sahib said that the parties on both sides would form a big government (mixed) together to improve the development and economic stability of the country and strengthen democracy.

On this very day, April 4, 1979, 35 years ago, he was apparently hanged at the behest of General Zia-ul-Haq, the military ruler. Justice Naseem Hassan Shah, a judge of the same court, has declared his judicial murder wrong.

Those who believe in the reward process consider the death of Zia-ul-Haq as the logical consequence of this wrong decision.