The ideology of Pakistan and Allama Iqbal 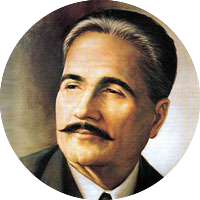 Now, on April 7, the 7th anniversary of Allama Iqbal was celebrated. A few special articles were published in the celebrated newspapers and that’s it. As a journalism student, I was wondering what happened to Allama’s dream? Let’s give up the dream, we even kicked them out of the school curriculum. And now our new generation does not even know who the poets of the East were.

Today, when I see such a situation in my beloved country Pakistan, I am shocked that an entity that not only woke us up when we were in the throes of slavery but also showed us a way to In time, we would have built a strong country and would have made Islam and Pakistan famous all over the world. Allama Iqbal’s poetry not only inspires Muslims but also hides a whole idea of ​​the state system. Let us know if you read only the poem of the kingdom in your book Aftab Kitab Bang-e-Dara.

How Allama has described the reality of democracy. If we only look at the ideology under which we got this country, the ideology of two nations. And what was this two-nation theory, that there were two nations living in the subcontinent? One is Muslim and the other is Hindu. Muslims are followers of Islam, and Hindus are idolaters.

But when Pakistan was acquired, it was renamed the Islamic Republic of Pakistan and from here the fate of this country began to deteriorate because Islam has its own regular system, on which democracy was forced. There can be no competition between the democratic system and the Islamic system. In a democracy, the majority of the people vote, while in the Islamic system, the rule of Allah, the One and Only, is enforced.

Within a democracy, people make laws that change over time, and in Islam, there is the law of the Qur’an and Sunnah, which is infallible until the Day of Judgment and cannot be changed. And the question is, can a law that is designed for just a few people benefit only one class? Or a law that is in accordance with nature and in which the interests of all classes have been taken into account. Yes, Islamic law is the law that is for all.

Allama Iqbal in his second poem mentions the conditions in the Islamic world, if we consider that the overall condition of us Muslims is still the same that we have been since the end of the Khilafah different countries and nations, races and colors I’m broken Allama says that there is a need to work hard to bring back the Islamic system of Khilafah because we are not only Pakistanis but also a Muslim Ummah and Khilafah is the shield that can keep us united. And Islam is our honor. In the same poem, Allama also asked us Muslims to erase the basic difference that we were divided into Sunni and Shia who had the right to the Khilafah first. Rather, we must strive to implement this system so that Muslims everywhere in the world can once again live a united and peaceful life.