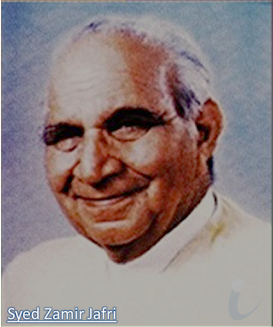 Syed Zameer Jafari is a well known and unique name in Urdu literature. He established his identity by promoting a tradition not only in poetry but also in prose. He continued to serve in the Pakistan Army as a Major. He could also write an “identity parade” in this regard. However, this good deed was done by Dr. Younis Butt. Whether the identity parade is of writers or poets, the conscience of Jaffery is prominent in both types of parades.

If writing humor is a difficult task, then understanding it is not an easy task. Many people have to tell a joke that the joke is over. Understanding humor requires a certain kind of sense, which is not often found, as if most people are “insensitive” in this matter. Syed Zameer Jafari is a name in the world of humor which, when read, evokes the sense of humor of an insensitive person. While Zameer Jafari’s poetry is unique in its themes, it is also considered to be of special importance due to its simplicity and simplicity. Zamir Jafri himself had said:

the kidney such Multan I am known by my wife hard

Not only is the late Zameer Jafari’s writing humorous, but his words appear to be interpreting many contemporary issues. His poetry, in a light-hearted manner, covers very serious and important issues and makes one think a lot, even seriously.

The oppressors create a little wheat, but produce life is a great reward of the Almighty. It is not possible to accomplish any goal and carry it out without his consent. Syed Zameer Jafari was one of the people to whom the Almighty had given access to both prose and poetry. Humor is a beautiful thing in itself. Syed Zameer Jafari made it even more beautiful.

Demonstrating “Sports Man Sprit” to bring love stories to fruition, he did not hesitate to say so. I stand in your coach as if I am a hockey goalkeeper.

I used to meet Syed Zameer Jafri in Lahore. There was a certain kind of stillness and dignity in his personality. That’s why his humor never feels flattering. This poem of his is related to reading. This is the only difference between knowledge and paralysis. In the college of male watchman girls,

Syed Zameer Jafari spent a large part of his life as an officer and then the officer also wore a uniform. Writing humor while staying within discipline is an even more complex skill. It would not be out of place to call his humor, written in an army uniform, “humor in uniform.” He was an officer himself, so he knew the nerves of the officers. This poem of his also seems to have been created on the basis of observation and experience.

Pin open, knuckles open, tie open, collar openWithin two hours of the opening, the officer had been reading his column “Zameer Haad Zameer Ghaib” in the weekly Hilal and other newspapers and magazines since the student days at the open military college Jhelum Sarai Alamgir, but he did not think that Zameer ever disappeared. It will happen. If the conscience disappears, nothing is left. The conscience is present and will always be present thanks to its work. As long as Urdu literature is alive, the chapter of Zameer Jafari’s humor can never be closed. When Zameer Jafari was “present” he had said:

Syed Zameer Jafari used to be the lifeblood of poetry and literary gatherings. The way they waved and waved. This was his specialty. He introduced a style not only of writing but also of speaking. January 1987 Jaffrey conscience on his seventieth birthday (70th) was the self’s own bar

until the last breath will rain and thunder will age class of person with age and is probably touching the age threshold But one thing that keeps a person young is their performance. Man’s work never dies. Then how can people like Zameer Jafri who have been engaged in scattering perfumes and distributing loves all their lives die. Life was unique to him. He never allowed life to become a victim of boredom and despair. Take a look at one of their fields of life.

Even in the melody of music, an excitement of emotions keeps the innocent laughter of a child alive . The sun, the moon, the stars are not the only means of subsistence.

Instead, he believed in literature for life. Even today, reading Zameer Jafari’s prose, one realizes the “live” scenes. The scene was also a special feature of him. He writes in his book The Present Conscience, The Conscience Absent:

“The offensive news of the village is perhaps more painful because of the high adoption in the village. The news of the village comes straight to you. You are directly affected by it. The latest news has not only come straight to us but also looks like an arrow. Otherwise, before that it would have been the big news of the area that so-and-so’s bull had been stolen. So-and-so’s horse has opened. Now this news has come that our house has been burglarized. Wheat or millet crop flourishes on both sides of our house during the harvest season. The thieves came from the field and dug in. They took away whatever they could carry in the form of utensils and perch. ”

The writings of Syed Zameer Jafari give off the fragrance of his village and homeland. A person who travels all over the world and is famous internationally, his love for his soil is unparalleled.

Remember in the snow of Norway, I am looking for the Caesar sheets of Jhang and Jhelum in this mechanical age. Villages, cows, hills, mountains are like money in one place:

Oh, the living colors of the streets, oh, the fighting neighbors, oh, the days when they were at home, mothers, go, mother, go, fill them It also seems like yesterday that Zameer Jafari’s TV program “Live” used to come. Today only “recording” is left. Maybe that’s the story of life. Qatil Shifai wrote for Ibn Insha ‘. You are a millionaire tourist. One thing is for sure. Don’t go where you don’t come from.