Muhammad Ali Jinnah had assured the protection of the rights of minorities before and after the establishment of Pakistan. 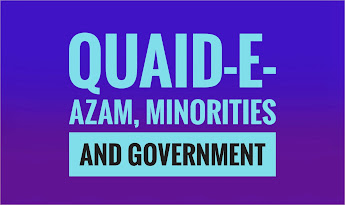 Your sermons, speeches and interviews show that just as you spoke about the rights of the Muslim majority, you also spoke about the rights of minorities.  The non-Muslim minorities living in the subcontinent, namely Sikhs, Hindus and Christians, were convinced that there would be no oppression and injustice in the state of Pakistan on the basis of religion, but justice and fairness in accordance with Islamic teachings.
Addressing the annual meeting of the All India Muslim Students Federation on November 15, 1942 in Jalandhar, he said: “Minorities have the right to a clear guarantee.  They discover what our image will be in the image of Pakistan in your mind.  This is a matter in which minorities should be given definite and clear guarantees.  We have done that.  We have passed a resolution that minorities should be given full protection and security.  I have said before that any civilized government will do this and it should do it.  As far as we are concerned, “our history and our Prophet (peace be upon him) have given the clearest proof that non-Muslims were treated not only fairly and justly but also generously.”
Addressing the All India Muslim League in a closed room on April 25, 1943 in Delhi, he said: “Now I want to say a few words about the minorities of Balochistan.  There are Sikhs, Hindus and other non-Muslims and Christians.  Mr. President!  It is not our habit to say things that we do not mean or to mean by one thing and say another.  We have clarified our position, I am here now, I think that if it is necessary and if there is a need for reassurance, I will repeat my position as the President of the All India Muslim League.  I tell the minorities in Balochistan that we will see that the minorities are treated fairly and justly.  We will work to create a sense of security and trust among minorities.  I think this is the basic duty of any civilized government.  We have the highest traditions behind us and this has been testified by historians.  Not only Muslim historians but also non-Muslim historians have stated that in general, wherever there was Muslim rule, minorities were treated fairly and equitably.
The latest example is Egypt.  In Egypt, Copts make up 5 percent, while Muslims make up the overwhelming majority of 5 per cent.  But you go there and see that they are treated well.  He holds the highest office under the Egyptian government and now accounts for more than 30 percent of the jobs.  So all this false propaganda created by the Congress is only meant to intimidate minorities.  He says what will happen to minorities if a Muslim-majority government is formed?  In this way, they give the impression of all kinds of terror.  This is another blow to the propaganda of the Congress to hold the minorities by the ear and turn them against the Muslims, ”he said.
Meeting a correspondent for the Associated Press in Bombay on November 8, 1945, he said in response to a question: “Hindu minorities in Pakistan must believe that their rights will be protected.  No civilized government can function successfully without giving minorities a full sense of security and confidence.  They should be made to feel that they are also involved in business and citizenship and that they should have adequate representation in government to do so.  Pakistan will give them this representation.
Addressing civil and military (land, naval and air) officers in Karachi on October 11, 1947, he said: “Another issue that is stirring in my mind is the treatment of minorities.  I have made it clear time and again in private and in public statements that we will treat minorities with kindness.  And it never occurred to me that we would push them away.  …  We will protect the lives and property of important minorities in Pakistan and give them full justice.  We will not force them to leave Pakistan.  As long as they remain loyal to the state, they will get their rights.  They will be treated equally with other citizens. “
On October 25, 1947, the Quaid-e-Azam gave a lengthy interview to Reuters correspondent Duncan Hooper in which he said about the protection of minorities:  They do not belong to any particular religion, belief or race.  I have repeatedly made it clear, especially in my inaugural address to the Constituent Assembly, that minorities in Pakistan will be treated as their own citizens.  And they will have all the rights and privileges that any sect has.  Pakistan will continue to pursue this policy and make every effort to create a sense of confidence and security among the non-Muslim minorities in Pakistan.
Quaid-i-Azam’s vision for the protection of the rights of minorities is in accordance with Islamic teachings.  Since Pakistan is an Islamic state, the Constitution of Pakistan provides full protection to minorities.  The present government should also make practical efforts to protect the rights of minorities.  But the rights of the Muslim majority should not be usurped under the guise of protecting the rights of minorities.  Unfortunately, for the last few years, the Muslim majority has been neglected under the guise of minority rights.  Instead of providing protection and resources to the religious schools at the government level, they have been declared as factories of terrorism and ignorance, honourable release of blasphemers, execution of guards of honour of the Prophet, arrest of clerics who came out to protect the honour of the Prophet,  Elimination of Hajj subsidy for Muslims and construction of Kartarpur corridor for Sikhs and construction of a mosque in Islamabad on one side and a temple on the other side.  All this is an oppression of the Muslim majority.
Therefore, it cannot be the style of an Islamic state to usurp the rights of the Muslim majority and flaunt the rights of the minorities.  It is the responsibility of the present government, named after the state of Madinah, to play a positive role in restoring its confidence.
SendShare234Tweet146Pin53Send