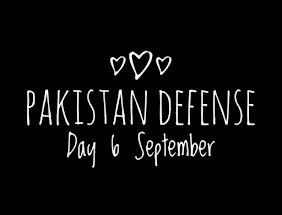 September 6 can never be forgotten in the history of Pakistan.  This is a proud day for the entire Pakistani nation and especially for the Armed Forces of Pakistan.  This was the time when every sincere Pakistani defended the country without risking his life. That is why every year September 6 is celebrated by every patriot as Pakistan Defense Day.  The September War was a great test for the Pakistani nation and the Pakistani forces, in which, thankfully, this nation and its brave soldiers were completely successful.  The impressions of today’s youth on the defense of the homeland and September are recorded in these interviews.

(Student)
Yes, we are still a nation full of emotions.  Regarding challenges, I would like to say that first of all we need to stop the growing sectarianism and create a substance of tolerance within ourselves. How long will we continue to fight each other due to religious intolerance?  Islam does not teach this at all.  I am sure that the day we overcome this sectarianism, the other problems of ours will begin to be solved.  The second most important thing is that we are still protecting our own personal interests.  No concern for national interests.  The time has come for us as a nation to think for our country.  Only then will we be able to meet any of the biggest challenges that lie ahead.

(Student)
There is no doubt that unfortunately, our country is facing many problems at the moment but it is also gratifying that serious efforts are being made to move the country in the right direction.  The Pakistan Army is the only organized body in our country on which we have full confidence.  Pakistanis have always been proud of their contribution.  Whatever the situation in Pakistan, mothers in Pakistan still choose the army for their children.  It’s about trusting an organization.  Similarly, every institution of Pakistan needs to create an atmosphere of trust in the hearts of the nation.  Operations like Zarb-e-Azb and eradication of Karachi from anti-national elements are commendable. 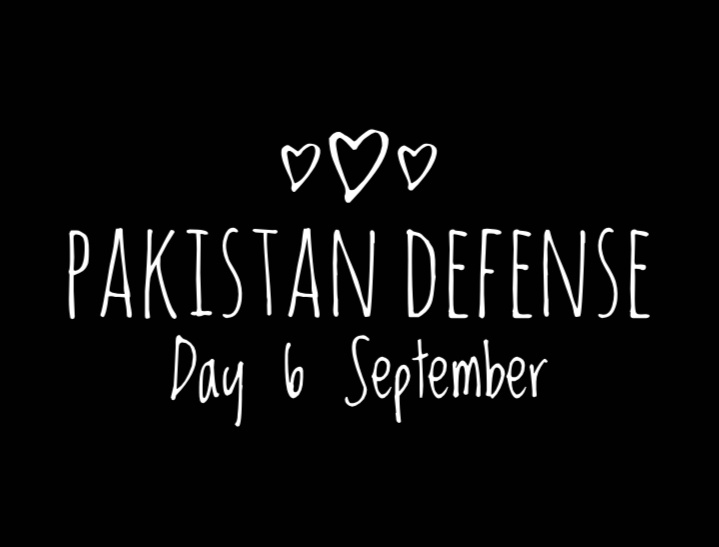 In Deland Saturday, celebrates every year as a defense defense, today 54 years ago, we had to face Indian aggression in September. In 1965, the nation of unusual commitment and passion, the whole nation, the whole nation, the bulls of the forces, were made by the walls of the enemy, in the dust of the enemy. This is the day when the Pakistani nation became Pakistani.
The world proved that Pakistan’s defense is incredible. Therefore, September 6 is important in our history and it is celebrated in the memory of the performance of Pakistan and the forces of Pakistan. Its aim is to remind Pakistan’s defense to believe Pakistan’s ethnicity and proudly the pilgrimage is to be headed on every front. September 6 is the day on which the passion was on their rise, the passionate emotion was on its rise, and the history of Shujaat in the world of the world, which is not the example of the world in the world, the same passion is the same as the same passion is the same for the first time the defense of Pakistan and the ideology of sacrifice and unity. Pakistan is a responsible country and peace and a Muslim, but relations between Pakistan and India were persecution since independence.
The biggest reason for stress in both the countries is Kashmir’s conflict that is demanding solutions. 1948, 1965 and 1971, Kargal, Siachen, border violence never had a message from India. The neighboring country India always demonstrated militancy, in the presence of such behavior, the defense of the defense was necessary to make incredible. Despite the limited resources, Pakistan beat the enemy of herself in the battlefield. In 1965, India attacked the global rules, including the formal announcement of the war against Pakistan. This was the first international war between Pakistan and India, Indian forces had bombed international border and began to fight against Pakistan.
India aggression was not faced by internationally embarrassing. Pakistan proved to be waited and fifty and win, and won the professional skill of Pakistani armed forces and loved love by the people of love. Major India has defeated India’s limited resources. Protective spots of Pakistan presented the offering of his lives and raised the nation’s head proudly. Pakistan was found in India’s proud dust. September 6, the renewal edible is celebrated on the official level to clear the new generation from brave forces and to strengthen its defense. Flags, military parade, exhibitions, military events, millions are significant heads of the day. There are also the events of the Himalayas, the colleges, colleges and publicly 695, and the candidates of the Indian India’s war.
Pakistani people tribute to the martyrdom on September 6, with the national national attitude and enthusiasm, who sacrificed their lives on the country. We tell our new generation that we are proud that our forces had a sacrifice of sacrifice, courageous, brave, best training and skill. September 6, the names of the youth who defended their homeland, the martyrs who were awarded military honors and the blessings of all the people who are deprived of their dust, which are martyred by the martyrdom of all the people! Tribute to all the braverays is September 6, the aim of Defense. The strongest strengthening and strengthen the state that Pakistan is not aware of its defense, the defense of the defense is strong, the defense of the peace is guaranteed. The current situation of Kashmir has become serious, provocative incoming incidents have been routine on the control line.
The 1965 vendor has been born in the nation’s issues in Kashmir. In such an environment when India has not prepared to give peace, Saturday has been more important than us.
Defense is the adoption of us, the subject is to adopt every kind of difference and to make the difference to the enemy, we have one and the 1965 passion is still alive. Any attacks can be dealt with any attack in the coming day. If the enemy effort to ensure the inflammation of the aggression, then the enemy will have to take a horizontal result of the military collision.
The Pakistan is also stronger than 1965, the Pakistan’s armed forces is one of the world’s best professional forces of the world, the long war against terrorism burn Pakistan’s military capabilities and skills. The passionate emotions, love, the honey and the whole nation, is loved by the full strength, the full confidence of Pakistani forces. The government has decided to celebrate the Saturday with the defense of the Supreme Saturday with the defense of the Supreme Center, according to the notification of the Entrepreneurship, according to the NATO, according to the NATO, the celebration of the day of the day of the martyrdom, the houses of the martyrdom and the monuments will be closed at all oven of the country for all attendants.
Today, internal and external threats are punished on Pakistan and our enemies are constantly in efforts that the border seeds in our ranks. Our situation in the border has been talent, the prospects on Kashmir have increased, the same message is made to be a message of defense, which is united, nations can not beat any of the mentioned day.
This message is more important than us. Our youngsters who have made their own for the sake of the earth, and come to the country, come to the promise, all the adversaries will play their own positive role in the defense. We will all beat the love of our homes more than your lives, to be the house of allows. O Lord’s path, the name of the worship of the family, says the greetings of the house.