The Message Of Pakistan Day

This day has been celebrated with great fervour for the last six or seven decades as compared to the resolution passed on March 23, 1940. However, apart from the last three years, terrorism in the country has been on the rise for many years.

Due to the environment, the event could not be held, which not only doubled the uncertainty in the beloved homeland, but also raised concerns about law and order and security in Pakistan at the international level. Denying India and other world powers, Pakistan was likened to a forest law, which stopped foreign investment in Pakistan and created a monster of unemployment, which promoted poverty and ignorance.

Recruitment of manpower proved to be an extraordinary opportunity for the forces aspiring to terrorism, which is why terrorism has taken the form of an epidemic across the country, leaving the entire nation in a state of fear and uncertainty. Is. However, nature finally took pity on Pakistan, which led our political and military national leadership. By healing our sorrows yesterday, we have given a new hope and enlightenment to the whole nation, which has given its wisdom.

And using courage, not only has it ended. Cursed from FATA, Karachi, Baluchistan and other areas that have become hotbeds of terrorism. The decisive battle for the eradication of terrorism is underway which is going through its final stages today and the day is not far when Pakistan will be able to overcome the scourge of terrorism and reach a dignified place in the world.

Of course, the shadows of chaos and uncertainty are deepening on the political scene of Pakistan today, mainly due to the growing differences between our national political parties which now take the form of personal enmity instead of being settled on the basis of principles. Are doing The whole nation is constantly watching this incident in the media day and night. 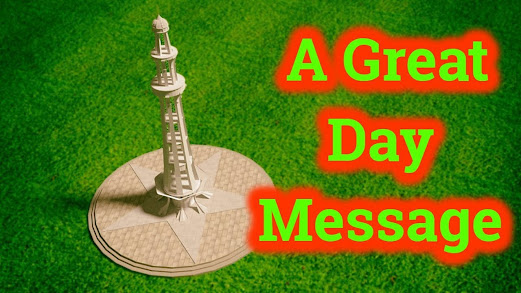 That is why, over time, the confidence of the average Pakistani citizen in democracy is growing. Instead of worrying about it, the way most political parties have decorated the members’ market in the recent Senate elections has not only created frustration at home but has also been ridiculed by Pakistanis abroad today. Has been blown up. Some parties are in favor of the Establishment and some are in opposition.

Conspiracies are being echoed from all corners of the country as the distance between the judiciary and political forces widens, with three to four months left until the next national election. Nevertheless, most political parties have their own manifesto and strategy, which, instead of presenting it to the nation, pursues a policy of blaming each other. Therefore, March 23 reminds all sections of Pakistani society of their national responsibilities and demands that our 70-year national journey be a journey backwards.

To turn it into a real development, all national institutions, especially the parliament, the judiciary, the administration, Pakistan’s armed forces and the media, need to work together to make Pakistan a progressive and prosperous country according to a dream. Founders of Pakistan. Come into being whose citizens can be proud of their national identity instead of being ashamed.

Pakistan Day is being celebrated across the country today. This day is commemorated on March 23, 1940 at a meeting of the Muslim League in Lahore to commemorate the adoption of the Pakistan Resolution.

At the meeting, it was renamed the Lahore Resolution, but the Hindu Press understood that it had demanded a separate homeland, so it renamed it the Pakistan Resolution. What is special about this is that Muslims from all parts of India were represented in the gathering and everyone from Punjab to Bengal was united and united. Only 7 years later, under the passionate leadership of Quaid-e-Azam, Pakistan came into being which was then West and East Pakistan.

Bengal was the province which was at the forefront of the movement for independence from the British and their expected successor the Hindus. The Muslim League was also formed at the house of Nawab Saleem A. in Dhaka. But only 24 years after the establishment of Pakistan, the hearts of Bengali Muslims were poisoned and they separated from Pakistan and formed Bangladesh. How it happened and who played a key role in it is a long story that has been analyzed many times.

Importantly, the Prime Minister of India Narendra Modi stood in Dhaka and claimed that Bangladesh was not created by any Mukti Bahini through us. The Indian army was fighting under its cover. This is a slap in the face to Bangladesh Bandhu and his son Hasina Wajid by the patrons of Bangladesh. However, it was also the fault of the rulers of West Pakistan. Until 1970, the Bengali brothers celebrated Independence Day and Pakistan Day together. The fact is that the purpose for which Pakistan was obtained and the promises made to its Lord have not been fulfilled.

Secular elements are still trying to secularize the Islamic State of Pakistan in the country, which was considered the same as the state of Madinah, and claim that Pakistan was created for economic reasons. He dislikes the interference of religion in politics, but he is grateful that the majority of Pakistanis are ideologically Muslim. Therefore, if you risk attacking the glory of the Prophet, then all sects should unite.

March 23 is a reminder of why Pakistan was acquired. But sadly, the nation is happy to have a happy holiday. There are many meetings in which everyone engages in his hobby by giving a speech. This time too, it is Friday, March 23. Imams of mosques and preachers, if they shed light on Pakistan’s resolution and its objectives on this occasion, the true message of Pakistan Day can reach many people.