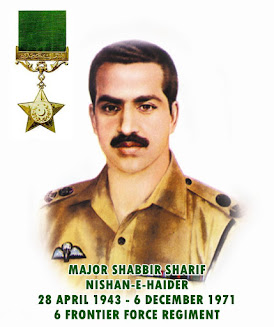 The land of a nation whose young people value the borders of their land more than the continuity of their breath is never barren and never subjugated. The destiny of nations is the star of destiny of every nation

But there are some “invaluable” human beings whose nature, temperament, tolerance and mannerisms seem to be advancing towards a great destination from the very beginning. The blood circulating in their veins keeps them always active to take them to a great place. They are from among us but they are … separated from us.

Apparently they have gone to an eternal world far away from a front, a mission, a battalion or a seminary, but if we look at it with the eye of the heart, they are the ones who are running us, begging, explaining and the last drop of blood for a great cause. These people are immortal.

These people are immortal, whose name, whose deeds, whose deeds, whose loyalties, whose prayers, whose sighs, every moment, every moment, every moment gives us spiritual comfort, peace of heart and enthusiasm. The events of their lives take us out of laziness, laziness, impracticality and irreligion to a world where we have to protect our land, our mothers, our sisters, our earthly flowers and even our corpses, including our corpses. Prefer every blessing.

The journey of separation from every blessing associated with earth and body is near. He does not say that I should be given medical help. His will, his advice, his facial expressions all prove the truth of the words that come out of his mouth. He is saying and the word is coming down in the hearts and it seems that a handful of people have been provided with the great help of the army.

Major Shabir Sharif was born on 28 April 1943 in the town of Kanjah, Gujarat, in the house of Major Muhammad Sharif during the British Raj. Major Shabir Sharif also had a keen interest in bodybuilding and as a rider he liked motorbikes. He was of medium height, fair complexion, broad forehead and big eyes. He was a sociable and moral man.

He was also a close relative of Major Aziz Bhatti Shaheed, who was awarded the Haider Medal. He passed the Oliol examination from St. Anthony’s School, Lahore. I got permission to join.

Love of country was in your nature so I got commissioned in the army on April 19, 1964. As a son of a professional soldier, I have a sense of responsibility, love from my land, courage, independence, perseverance and bravery. That is why he showed courage and bravery in the Pak-India war of 1965 and was awarded the “Star of Courage”. For his exemplary performance, the military academy Kakul also awarded him. He was also awarded the Sword of War. On September 11, 1969, he was appointed as the Commander of the Company.

Courage and bravery as well as managerial ability were also characteristic of your personality. In 1967, he was posted to Kakul Academy for training. Here, the leadership skills in his personality were further enhanced. He was also promoted to the rank of Major at the Kakul Military Academy.

In 1971, when the war was raging inside and outside the country, they had become strangers. The bloodthirsty soldiers of the enemy, Mukti Bahini, were wreaking havoc on humanity in East Pakistan.

The atmosphere in West Pakistan was tense. Survival is in jeopardy. The future of the family and the future of the children depends on the love and devotion of the devotees who protect the homeland. The command of about six Frontier Forces was fulfilled on December 6, from where two villages, Makh Khera and Beriwala, could be attacked. You had to occupy a high barrier. The enemy had occupied this position before. From a military point of view, this place was of great importance. For this, India had stationed a regiment of Assam here which was also being aided by a squadron of tanks.

On December 3, at 5:45 am, Major Sahib attacked the Garm Khera Bridge. Before reaching Beriwala, he had a force of 100. The village was militarily guarded and landmines were laid in it. The force knew that there were mines but did not know the safe route. Before entering the dangerous zone, Second Lieutenant Farooq Afzal addressed Major Shabir Sharif and asked, “Do you know that the road we are passing through is littered with mines?” He replied, “Yes, I know.” Farooq Afzal asked again, “Do you know of any safe way? You have not got the answer.

” 1. Farooq Afzal, “Then” ?? Major Shabir Sharif replied, “Unless you take a risk, you cannot win wars. The death toll in such places is close to 10%. Trust me. We will fight till the last soldier.” In doing so, you brave comradesIncluding the 30 feet wide and 10 feet deep defensive “Sabona canal” crossed.

It was the truthfulness of the emotions and the charisma of the blood running in the veins that in just one hour you turned off the light of the lives of 43 soldiers of the enemy who were heavier and heavier than you and at the same time completely destroyed their charts.

On the important documents of the enemy Captured and took 38 soldiers prisoner. Two battalions of the enemy were fighting against you. A full squadron of tanks was assisting them.

Demonstrating great courage, he left his front on the night of 5th and 6th December, grabbed the company commander of the Kurdish enemy’s army, 4th Regiment Major Ranin Singh, and then cut off his breath after a fierce battle. Destroyed their fronts. He continued to defuse enemy tanks with anti-aircraft guns. On December 6, 1971, at around 11 o’clock in the morning, an enemy tank landed on the right side of his chest and he was martyred.

The death of a martyr is the life of a nation.

It is a strange coincidence that on the same night, his mother was cooking food in her house at eleven o’clock in the night and was dancing on her lips. “O man of Mujahid, wake up now.

At the time of his martyrdom, his parents were living in Lahore while his wife was in Attock district. According to the advice of Major Shabir Sharif, he was buried with full military honors and tears in the eyes of his friend.

He warmed the hearts of young Pakistanis and said, “I would rather sacrifice for the country than accept the slavery of the enemy.” He was martyred near Okara and was 23 years old at the time. He was the elder brother of current Army Chief General Raheel Sharif. He was the only person who was awarded the Haider Medal and the Star of Courage by nature. Because of his unparalleled courage, he was often called Army Casperman.

April 28, 2016 is the forty-fifth day of martyrdom of Kwan, which is testifying to the fact that even today, if anyone looks at this homeland with a dirty eye, the successors of the martyrs will not hesitate to lay down their lives. The Kohars are ready to lay down their lives for it. But it is also an undeniable fact that “precious diamonds” like Major Ranashbir Sharif are sometimes born.

These were the attributes that distinguished him from others and as long as the last person of this nation remains, the honor and dignity of his martyrs will remain in his heart forever. May he always keep this holy land happy. Amen. This is the red color of themyth of freedom