Q.1 a). The telephone company reports that among 5000 telephones installed in a new subdivision 4000 have push buttons. If 10 people are called at random what is the probability that exactly 3 will be talking on dial telephones?
b). Define hypergeometric distribution.

Answer:
a) Let X denote the number of people that have dial telephones. probability of a push-button telephone is

Answer:
BERNOULLI DISTRIBUTION:
An experiment in which a single action, such as flipping a coin, is repeated identically repeatedly. The possible results of the action are classified as “success” or “failure”. The binomial probability formula is used to find probabilities for Bernoulli trials.

Q.3) If 5 cards are dealt from a standard deck of 52 playing cards what is the probability that 3 will be clubs.

Q.4) Prove that mean and variance of Bernoulli distribution is p and pq.

Q.10) The probability of a man scoring a penalty in a Hockey match is 1/3. How many times he should be given a chance so that the probability of scoring successfully at least once is greater than ¾? 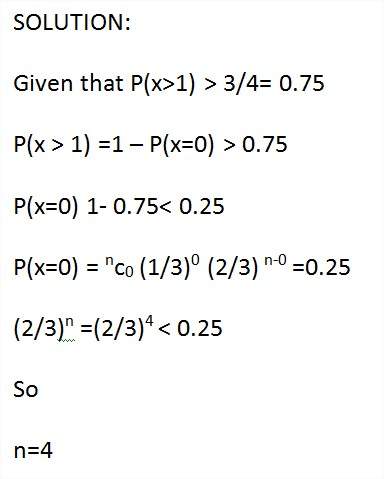 Q.11) If 30% of a population on their own homes, wheat is the probability that a sample of seven from the population will contain:

Q.13) The output of a production process is 10% defective. What is the probability of selecting exactly two defectives in a sample of five?

Q.14 a) Compute the mean and standard deviation for the binomial distribution for which p = 0.7 and n = 60.

PART B:
Since p is greater than one so binomial distribution does not exist: