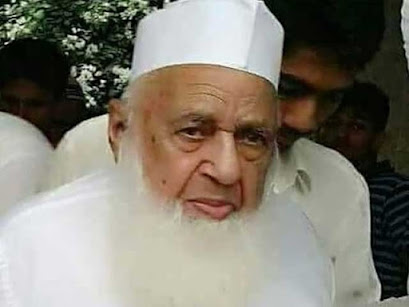 Haji Abdul Wahab Sahib used to sleep at night with death on his head and wake up in the morning to face death. He had said in his last speech during a gathering – – –

Before Isha on Sunday, in the cemetery in front of Gate No. 11 of the Raiwind Tablighi Markaz, Arsalan was standing in front of me on the fresh shrine of Haji Abdul Wahab Sahib, raising his hands in prayer, unaware of his surroundings. With tears streaming down his face and perhaps relieving his heartache, he pulled a tissue out of his pocket and wiped his face. A young man shook his hand, then hugged both of them and one of the young man’s chest. Ah, it turned out. An old scene refreshed in my imagination.

We had the May 5, 1980 newspaper in front of us. The biggest news was the death of Yugoslav President Marshall Tattoo.

Our topic was Martial Tattoo’s services to Yugoslavia. Sitting quietly among us, a friend of ours from Tablighi Jamaat asked if Marne Villa was a Muslim. When he was told that he was a non-Muslim, an “ah” came out of his mouth. I don’t know if “sighs” affect the hearts of others but I have witnessed that this was the “sigh” that changed the life of a young man named Arsalan who was present at our party. Not only that, but the Tablighi Jamaat has also quietly changed the course of the lives of countless people.

The motto of the Tablighi Jamaat is to mourn the humiliation of the Muslims, to try to awaken them from their slumber, to make them realize the reasons for their backwardness in the race for success and to devote themselves to this work.

And Haji Abdul Wahab Sahib Noorullah Marqada has an eternal role to play in encouraging this slogan to remain alive in the Jamaat.

He was 21 years old when in Nizamuddin he made the pain of the spiritual inferiority of Maulana Ilyas his own pain and sacrificed all the months and years of his life to become the medicine of that pain. He was Maulana Yusuf Kandhalvi and He was a trusted companion of sincere devotees of religion like Maulana Inam-ul-Hassan.

Among the elders who laid the foundation of Tablighi in Pakistan was Tablighi Jamaat in Pakistan after Muhammad Shafi Qureshi (1903-1971) and Haji Muhammad Bashir (1919-1992). Made rich. He was also a member of the World Council in Nizamuddin. And influential figures around the world

In light of the teachings of preaching on the relationship between Muslims and Islam, this poem of Hafeez is as follows:

Life without relationship is not good,

life is not good either.

Haji Abdul Wahab He said in his last speech during a gathering that repentance is the best practice. ۔

Who says that if death comes, I will die, I

am a river, I will go down to the sea (Ahmad Nadeem Qasmi)