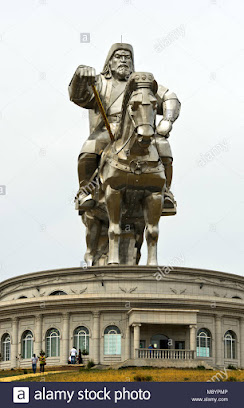 Genghis Khan felt that Jalaluddin Khawarizm Shah was a great danger to himself because he was aware of Jalaluddin’s courage and bravery.

After the death of Sultan Aladdin Kharazm Shah, the Muslims were in a state of chaos. Their armies were divided into small pieces and lost their strength and power. A large number of Muslims were killed, and the settlements and cities attacked by Genghis Khan and his troops were completely destroyed. Some of the children were hiding in the mountains and forests. In such a situation, if there was any way to save the Muslims, it was Jalaluddin Kharazm Shah, the eldest son of Sultan Aladdin Kharazm Shah, but what could he do alone against the Mongols. However, when Jalaluddin assumed the office of Sultan after the death of his father, he had two options.

The first was to run ahead of the Mongols, following the path of humiliation and disgrace, like his father, Sultan Aladdin Kharazm Shah. ۔ The second is that the young man humiliated the death of honour by working with courage and bravery Prioritize life So Sultan Jalal-ud-Din Khawarizm Shah took another route and decided to form an army to fight Genghis Khan and left for Khwarazm, the capital of the empire with some of his children and soldiers. The soldiers who had fled due to the cowardice of Sultan Aladdin began to gather around Sultan Jalaluddin. Thus, in a few days, 7,000 soldiers gathered around Sultan Jalaluddin.

When Genghis Khan was informed that Jalaluddin Kharazm Shah was staying in Kharazm city with a small army, he immediately sent an army to attack Kharazm. He did not want Jalaluddin to survive. Or mobilize an army against him, he felt it was a great danger to him because he was aware of Jalaluddin’s courage and bravery. When the Mongols attacked Sultan Jalaluddin, they thought that he, like his father, would run away after hearing his name. But this did not happen. Sultan Jalaluddin with his small army fell on the many times the larger army of the Mongols and fought so fiercely that the Mongol soldiers fled. This was the first defeat of the Mongols at the hands of the Sultan.

Genghis Khan was very worried and anxious when Sultan Jalaluddin moved from one city to another. He knew that if he gathered the scattered Muslims around him, he would obliterate the Mongols. He wanted to overthrow Sultan Jalaluddin as soon as possible. So he sent another large army to attack the Sultan.

The number of Sultan Jalaluddin’s army was now about eighteen thousand. He was informed by his informants that a large army of Mongols had laid siege to the Muslim city of Kunduz and that the people there were bravely fighting them and preventing the Mongols from entering the city. The army fell on the Mongols. A fierce battle ensued in which the Mongols suffered the worst defeat and fled. This was the third defeat of the Mongols at the hands of the Sultan.

After this victory, the Sultan with his army reached the city of Barwon via Ghazni, where he was informed that an army of Mongols had laid siege to Bamiyan, so Sultan Jalaluddin with his army reached Bamiyan and killed the Mongols. This was the fourth defeat of the Mongols at the hands of the Sultan. When Genghis Khan got the news of this fourth defeat, he became very angry at the weakness, humiliation and defeat of the Mongols. That he will surely avenge his humiliation and disgrace on Sultan Jalaluddin. He immediately sent a speedy messenger to order the defeated army to stop there and to say that Genghis Khan himself was coming there to fight Jalaluddin.

When Sultan Jalaluddin was informed that Genghis Khan himself was coming to attack him with a large army, he decided to confront Genghis Khan. On this occasion, Sultan Jalaluddin divided his army into three parts. The army of the middle part was retained by the Sultan, the army of the right and the left side under the command of their two generals Saif al-Din and Amin al-Mulk, who had the best experience of war, in the open field outside the city of Barwon.

After the defeat of Genghis Khan, a great accident took place in the army of Sultan Jalaluddin. The feud between the two commanders of the Sultan’s army, Amin al-Mulk and Saif al-Din, began with a very beautiful and high-bred horse that had fallen into the hands of the Muslims in this battle. In a fit of rage, Amin-ul-Mulk struck Saif-ud-Din on the head with a horsewhip, which Saif-ud-Din complained to Sultan Jalaluddin.

Did not want to be discouraged. Therefore, the Sultan did not react in any way and it was expedient to remain silent. Saif-ud-Din was deeply saddened by the Sultan’s silence. He told his part of the army that he could no longer stay with Amin-ul-Mulk, we would return. Explained that if we acted by disagreement, the Mongols would attack us We will overcome, it is our coincidence that is why we have defeated the Mongols. At the Sultan’s explanation, Saifuddin remained silent at that time, but when everyone fell asleep at night, Saifuddin left Sultan Jalaluddin with his army. Sultan Jalaluddin was saddened by Saifuddin’s departure.

Genghis Khan was in a state of great rage after losing to Jalaluddin and was waiting for the right opportunity to avenge his defeat by attacking Jalaluddin. When his informants informed him that one of the Sultan’s best generals had defected from the Sultan with his army, Genghis Khan thought that he would never have a better chance of attacking Sultan Jalaluddin. Will, So he gathered his whole army and marched towards the Sultan.