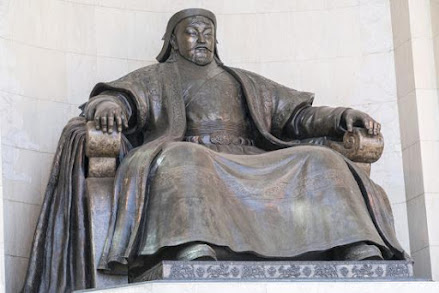 Genghis Khan’s longing to have Sultan Jalaluddin Kharazm Shah captured alive could not be fulfilled for the rest of his life.

Sultan Jalaluddin reached the banks of the Indus River and chose a large field to inflict a final blow on Genghis Khan. At this place, the flow of the river Indus was very fast and the water was so deep that the river could not be crossed. The location of this field was such that on the left side there were high mountains and on the right side, the river Indus cut a long curve towards the back which made the right, left and rear part of this field safe. Only the front was open. Jalaluddin was fully prepared to fight Genghis Khan with his army here.

The day of the battle arrived and one morning early in the morning Genghis Khan appeared in front of the field with his entire army. Sultan Jalaluddin saw that Genghis Khan had made some changes in his army this time. He used to live in the middle of the army, but this time he was in the back of his army and he had ten thousand Mongol soldiers around him. Were Maybe he did it because he was overwhelmed by Jalaluddin’s courage and bravery. He knew that if Jalaluddin won the war at any point, he would be beheaded.

To start the war, Genghis Khan advanced a portion of his army, wounded on the bell, knowledge rose and the armies lined up in front of each other, Sultan Jalaluddin Khawarizm Shah commanded the left part of his army, Amin-ul-Mulk’s command. I ordered to move forward. The Muslims and the Mongols clashed, a fierce battle ensued, and the Sultan and his mujahideen attacked the Mongols so fiercely and violently that the Mongol army’s footsteps were crushed and they were forced to retreat. On this occasion, Genghis Khan’s sons Ghairat came and helped his army. Amin al-Mulk’s detachment was pursuing the fleeing Mongols, and this was their mistake because the Mongols had retreated under a strategy. When the Sultan’s soldiers pursued and went deep into the Mongol army, the Mongols ambushed them. Amin al-Mulk’s troops suffered heavy casualties.

Genghis Khan, who was standing at the rear of his army, was fighting his army. He fell in the sight of Sultan Jalaluddin. He would annihilate the Yatu Mongols or surrender himself to death, and with this determination, the Sultan, with all his army, attacked Genghis Khan.

Sultan Jalaluddin wanted to reach Genghis Khan. When Genghis Khan saw that the Sultan wanted to attack and kill the Mongol soldiers by cutting them off, he rode on a fresh horse to the rear of his army. Ran towards However, the number of Sultan Jalaluddin’s army was not equal to that of Genghis Khan’s army. The Sultan had an army of only thirty thousand as compared to the army of millions of Mongols. But with the fervour and fervour with which the Muslims were fighting, Genghis Khan estimated that if the war continued like this, Jalaluddin and his army would kill millions of Mongols and cut off their own necks.

Khan separated one of his generals and his part of the army and ordered them to somehow cross these high hills and come down and attack the Sultan’s back or to his left, thus Sultan Jalaluddin On two fronts of war Will open up and he will not be able to fight on two fronts with his small army. The Mongol army that climbed the mountain was many times larger than the Sultan’s army. The army climbed a high mountain, in which many Mongol soldiers fell down the mountain and died, but this army did not descend to the other side of the mountain. Succeeded. Now Genghis Khan and his sons from the front and the army descending from the mountain on the left attacked Sultan Jalaluddin with all their might.

Sultan Jalaluddin estimated that the number of his army was very small, the way the Mongols managed to attack him from two sides, his army would suffer a great loss, he raised his army to save it from this loss. He shouted takbeers loudly so that Genghis Khan’s army could be pushed back and his army could be taken to a safe place on the banks of the river Indus. The Sultan had temporarily forced Genghis Khan’s army to retreat, but when the Sultan retreated towards the river, the Mongol soldiers from behind fell on his soldiers in the form of a flood and greatly reduced Sultan Jalaluddin’s army. More casualties.

When the Sultan retreated and reached the top of the high mountain range of the Indus River, he saw that there were only seven hundred Mujahids left around him at that time. Seeing a handful of his companions, the Sultan was disturbed. He realized that his last hour had come. He looked at his weary horse and his companions with sad eyes. He got down from his horse and rode on a fresh horse. Taken to a high mountain. Once again he cast a longing look behind him and to his right and left, leaning on his horse and leaping from the top of a high mountain into the Indus River, flowing like death.

Sultan Jalaluddin, who had no regular empire or army, but the Mongol soldiers were reluctant to confront him. If Sultan Aladdin Khawarizm Shah had obeyed his brave son and handed over the command of his army to Jalaluddin, there would be no mention of Genghis Khan anywhere in history today, even if there was mention of a mountain chief. But what happens is what nature approves of.

After this decisive battle fought on the banks of the Indus River, Genghis Khan began to miss his homeland, so he decided to return to his homeland with his army and set out for the capital city of his empire, Karakoram. Across the highest desert, Gopi was about eight hundred miles from Tibet. Before his departure, Genghis Khan appointed his governors and governors in the open areas. In the wars so far, a large number of people have been dragged along with the Mongol army in the form of Ghafir prisoners.

He intended to get rid of the prisoners, and ordered that all the prisoners be killed. On this order of Genghis Khan, all the men and women except the women of the royal harem of Khwarezm were killed. These unfortunate women were given one last chance to look at their homeland and sigh. Among the captives was a Turkan woman, the mother of Sultan Aladdin Khawarizm Shah, who was ordered to Walk in front of the army with all the women of the family, bareheaded and barefoot. And let all women mourn their destruction and ruin. This mistreatment of Khwarizm Shah’s mother, wives and daughters is a black mark on Mongol history.

However, when Genghis Khan reached the banks of the Swan River, it was the place from which he first entered the Khwarezm Empire. When he reached the bank of the river, he ordered to celebrate the victory. At that time, he was sitting on the throne of Sultan Aladdin Kharazm Shah, which he had obtained during the conquest. In his hand was the staff of Sultan Aladdin. Genghis Khan and his soldiers left for their homeland after celebrating this victory for several days on the banks of the Swan River.

Genghis Khan was now old, but he still wanted to invade the areas of China that had survived his attacks and annex them to his empire, but Genghis Khan invaded China again and conquered them. Did not get respite and died in the meantime. After his death, his body was loaded in a cart and brought to the Karakoram, the central city of Paras in the Gopi Desert. Any caravan or passenger found on the route through which Genghis Khan’s body passed would be killed so that no one would know that Genghis Khan was dead.

When Genghis Khan’s body was brought to his capital city of Karakoram, it was suggested that he be buried. ۔ This tree was very tall and big. Seeing this tree, Genghis Khan often said that its shade is a place of great comfort for the old. There were other small pine trees around this tree which in a way surrounded this big pine tree. However, a huge tomb was dug under the shade of this pine tree. Genghis Khan’s horse, which he had ridden in his last days, was then killed, and his bones were separated, burned, dried and cleaned, and a small tent was set up inside the tomb. I placed cooked meat, grain, a bow, a sword and his horse bones, after which Genghis Khan was buried in this tomb.