The bright side of Fatima Jinnah’s life!

Fatima Jinnah was born on July 30, 1893 in Karachi. Jinnah had seven siblings. Muhammad Ali Jinnah was the eldest in the family, and Fatima Jinnah was the second last child in the family. In this family of seven siblings, she was the closest to Muhammad Ali Jinnah. After the death of his father in 1901, his well-known and respected brother became his guardian. Fatima Jinnah joined the Bandara Change in Bombay in 1902, where she remained in a hostel after the death of her parents.
In 1919, he entered the highly competitive University of Calcutta, where he studied at the Dr. R. Ahmed Dental College. After graduating from there, she moved to Bombay in 1923 with the idea of ​​opening a dental clinic.
Human history shows that only those nations live with dignity who do not forget the services of their leaders. Not only do they protect the ideological heritage they meet, but they also carry out the duty of preaching and publishing them. It is this ideological affiliation that fills nations with the spirit of freedom and self-knowledge and makes them their place as independent, sovereign and proud nations. The Mother of the Nation, Fatima Jinnah, was such a rare and ingenious entity.
The nation will never forget the services. The establishment of the great Islamic state of Pakistan is the result of the selfless, tireless work and struggle of the father of the nation, Hazrat Quaid-e-Azam Muhammad Ali Jinnah, who united the scattered Muslims despite the conspiracies of his own and strangers , made a nation and in this struggle his great sister Mother of the Nation Fatima Jinnah was also an equal participant. If the struggle of the great brother did not include the sincerity, hard work and understanding of the great sister, then God knows best how long the struggle for the establishment of Pakistan would have 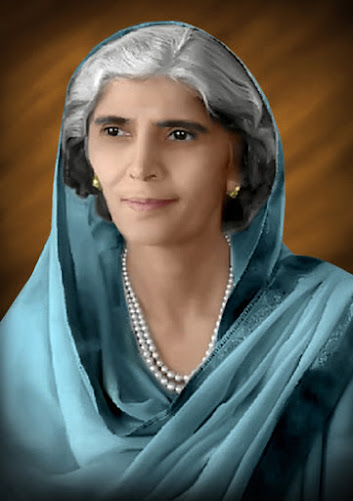 been and what the outcome would have been.

The political insight, leadership, courage, selflessness and sacrifice shown by the Mother of the Nation during the Pakistan Acquisition Movement and after the establishment of Pakistan is a shining chapter in our history. He is not only a benefactor of the nation but also a role model for our present and future generations. While Quaid-e-Azam Muhammad Ali Jinnah illuminated the dark paths in the light of the torch of Islam, his devoted supporter and sister-in-law Fatima Jinnah, who was guided by Islam, strengthened the weak arms of the torch-bearer with her thoughts and deeds. ۔
If the deprivation and enslavement of the Muslim Ummah had made the brother restless, then the sister would not have spared a single minute to bring peace and comfort to the restless heart of this great brother.

She was involved in politics alongside her brother. When the All India Muslim League was being organized, Muharram Fatima Jinnah became a member of the working committee of the Bombay Provincial Muslim League and worked there till 1947. In March 1940, he participated in the Lahore resolution of the Muslim League. Due to him, the All India Muslim Student Federation was organized in February 1941 in Delhi.
During the transfer of power, Fatima Jinnah formed the Women’s Support Committee, which later became the center of the All Pakistan Women’s Association (APWA), founded by Rana Liaquat Ali Khan. ۔ He worked hard for the settlement of refugees after the establishment of Pakistan. She also returned to political life when she ran for the presidency of Pakistan.

On the evening of July 8, 1967, Fatima Jinnah attended the wedding of Mir Laiq Ali’s daughter, but apparently returned shortly afterwards due to low spirits. As usual, he locked the house, threw the keys in the kitchen and took the usual glass of milk with him. The next morning, Fatima Jinnah’s friend and neighbor Begum Hidayatullah was called to open Fatima Jinnah’s bedroom where she was found dead.
The Karachi commissioner and inspector general of police, both present at the scene, noticed that the door to his gallery was unusually open and the milk glass was missing.
Celebrated in the years of Fatima Jinnah in 2003, her role in the stability of the nation can be acknowledged. This year, however, was to study the controversy and controversy when former General Attari and Jinnah’s online secretary, Syed Sharifuddin Pirzada, announced that Akhbar Pir Bhai, a prominent Indian lawyer and nephew of the funeral, the then Ayub Khan The meeting was held on the death of Fatima Jinnah, Pir Bhai never did an autopsy, it was held at the funeral of Fatima Jinnah and the doctors who declared Fatima Jinnah dead because of the doctor’s heart were examined. In addition to the reading, the judicial investigation of this case also continued.