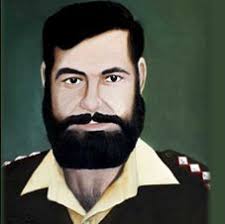 Colonel Sher Khan was born on January 1, 1970, in Nawan Kali, a small village in Swabi and received his early education there. He was born into a religious family and was very devoted to fasting and prayers. His full name was Sher Khan but his grandfather was a colonel in the army and on the Kashmir front, his grandfather had rescued six of the enemy and a very large one.

area was liberated from enemy occupation. So your grandfather used to call Sher Khan Colonel Sher Khan with the addition of the word Colonel. Seeing his grandfather, Sher Khan also had a passion to join the army and to make this dream a reality, he enlisted in the Pakistan Air Force in 1987 as an airman.

After completing his initial training, he went to the School of Aeronautical Korangi, Karachi. He worked hard and got a trophy for his hard work (Chief of Staff) and also got good positions in other courses and here he (Shaheen) got the title.

Colonel Sher Khan had the passion and enthusiasm that always kept him awake and to make his dreams come true he took the exam to get a commission in the Pakistan Army and moved to Kakul Abbottabad in 1993 for training and in 1994 Joined Sindh Regiment as Second Lieutenant in Pak Army.

In 1998, Sher Khan was sent to the Kashmir front for two years to fight the enemy on the Line of Control. Sher Khan liberated a large area from the enemy and set an example of bravery that is characteristic of the Pakistan Army and Colonel Sher Khan’s bravery was also recognized by Indian officers.

Colonel Sher Khan used to put his seal on the face of the enemy’s army if he killed them. ھو⁇. The Government of Pakistan posthumously awarded Col.