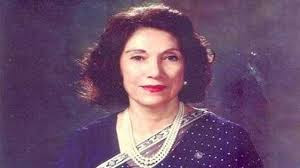 Nusrat Bhutto has been fearless, fearless and full of compassion since her childhood, which encouraged her to face these difficult situations.

Begum Bhutto was born into a wealthy business, Iranian family whose ancestors settled in Karachi. At the time of Partition of India, his business was spread all over the subcontinent.

After the ouster of Zulfiqar Ali Bhutto, when he had to endure the hardships of imprisonment, he nominated Nusrat as the chairperson of the party in his absence. He fought with great perseverance and courage and fulfilled the duty of the leadership of Pakistan Peoples Party with great cheerfulness.

Begum Nusrat Bhutto has been elected to the National Assembly four times. She has also been a senior minister in the cabinet of her daughter Mohtarma Benazir Bhutto. Begum Nusrat Bhutto also received several awards at the international level.

She passed away in Dubai on October 23, 2012, after a long illness and was laid to rest in Garhi Khuda Bakhsh next to her great husband.

In recognition of his services to the country and democracy, the Government of Pakistan awarded him the country’s highest civilian honour, the Nishan-e-Imtiaz and the title of Mother of Democracy.