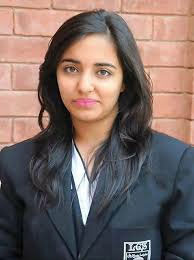 There are some people in the world who are second to none in the world due to their intelligence, ability and knowledge. Even if such people leave the world, their memory is always fresh in human hearts and minds. One such girl is “Arfa Karim“. Amjad Karim Randhawa was born in the Pakistani nation on the first day of Ramadan on February 2, 1995 at Sheikh Zayed Hospital Lahore.

Arfa Karim was isolated from all other children from birth and was different and superior in intelligence. She is the only girl who, when she was one year old, walked on the earth and started calling out the names of fruits and vegetables with her tongue. This unique girl inherited her mental and physical training from her parents. Grandfather Chaudhry Abdul Karim  Randhawa’s intelligence was also in the forefront.

Arfa Kareem’s intelligence can also be gauged from the fact that at the age of only three years, when the child is not even able to walk properly, he had read the Qur’an with the correct pronunciation, while the thirtieth verse he almost memorized orally.

While worldly education had started only a year later.

The Almighty had endowed Arfa with the intelligence of evil, and once he saw the thing or the writing, it would be imprinted in his mind. At the age of one and a half, he started reciting Naat, singing national anthems and songs. Arfa was memorized by her three-year-old grandmother with six words, “Dua Qunoot” and the complete prayer.

Arfa Karim had set a record by getting 100% marks in ten subjects in O level (which is considered equivalent to matriculation). At a young age, she could easily read not only difficult books like Kaliyat Iqbal but also Allama Iqbal’s poems.

Would explain exactly Along with literature, books by eminent computer technologists and professors in the English language were included in his study. Even though he did not take any improvement from anyone in music and singing, he still sang the famous hymn of Ustad Nusrat Fateh Ali Khan, “Someone is the one who is running the system of existence, he is God”.

And “take” She used to sing Tarnam when she was only three years old. Normally, five year old children go to school but Arfa stubbornly started going to school when she was only three years old. He left children of his age far behind in competitions, debates, music and baiting. Then, when he turned his attention to computer technology, he became the world’s youngest Microsoft professional before completing the first decade of his life.

In 2005, Arfa Karim was formally invited to the United States by Microsoft headquarters. Microsoft engineers wanted to test the intelligence of a young Pakistani girl. When Arfa arrived at Microsoft headquarters in the United States with her father, Amjad Karim Randhawa, this young intelligent girl not only impressed all Microsoft experts and engineers, but also published articles, features and articles on Arfa Karim in American newspapers and magazines. Done

Bill Gates, who doesn’t even have a second to give to anyone, not only had a special ten-minute meeting with Arfa Karim, but also acknowledged Arfa’s abilities and welcomed him. I will go to Pakistan to make his dreams come true. It is said that Arfa Karim answered the critical questions in the background of Pakistan’s internal situation with such skill and confidence that the British were surprised. They were shocked and shouted that nature had fixed an encyclopedia in the mind of this girl. If she was asked about computer technology as well as any other field, she would give the correct answer without a moment’s delay.

In 2006, Microsoft’s International Experts Conference was held in Barcelona, Spain, to which 5,000 selected IT experts from around the world were invited. Eleven-year-old Arfa Karim was representing Pakistan at this grand conference on computers. The theme of the conference was “Get ahead of the game.” In this conference, Arfa  Karim’s dissertation not only received a standing ovation from computer experts from around the world, but also opened many doors of wonder and curiosity.

During the one-week stay, Arfa’s interviews were broadcast on several international TV channels and numerous delegations of technologists met with the young Arfa Karim as an honor. Considering his intelligence and expertise in Microsoft technology in Spain, you Has been dubbed the Cyber Prince.

Seeing Arfa Karim flying to the heights of fame, he was invited by the Information Technology Professional Society of Dubai. There, too, Arfa opened new avenues of wonder and curiosity. In just a short span of one hour, Arfa learned to fly and obtained a First Flight Certificate. Given Arfa’s confidence and expertise, the instructor pilot said that after a few months of training, Arfa could get a commercial pilot’s license.

Among other virtues, Arfa’s poetic talents were on the rise. Purpose, seriousness of subjects, nationality and the eternal status of life, as well as the color and mischief of childhood were also prominent. Arfa expressed his feelings in English, Urdu and sometimes Punjabi. What did she do in style? It would not be wrong to say that Arfa Karim’s writings and speeches, which reached the heights of fame at an early age, had an element of high-spirited, eloquent and soul-burning. At such a young age, Arfa Karim won the Fatima Jinnah Gold Medal. * Salam Pakistan Award * Presidential Award Medal of Merit.

The journey of success and accomplishment continued as she reached the ominous hour when on the night of December 22, 2011 she felt a severe headache. As his condition worsened, he was admitted to CMH Hospital, Lahore. The pain was so severe that both his heart and mind were severely affected and Arfa went into a coma. Everywhere where parents and relatives were worried about Arfa’s illness, When the news of Arfa’s illness reached Bill Gates through the international media, he contacted Arfa’s parents without wasting any time and assured them of all possible help. He made arrangements to contact the local doctors of the International Medical Panel. Arfa’s condition improved somewhat on January 13, and consideration was given to taking him abroad for treatment, but these efforts were unsuccessful after 24 consecutive days of unconsciousness.

Indeed, we are all for Him and to Him we shall return.

Arfa Karim, who gained the attention of the whole world at a very young age due to his God-given abilities and intelligence, was really what he loved his parents and relatives and what were his dreams in the future. Know these unfulfilled dreams and try to interpret them.

On the way, they were searching for something on the ground. Seeing them, Arfa asked, “Papa, what are these people looking for on the ground?” I told them that they would point out the hooves of the stolen buffaloes. It is assumed that the stolen buffaloes are present in the same place. Listening to me, Arfa Karim said in a curious tone that Abu is talking about what era he is talking about.

Arfa had very high profile projects. She was a bright star of Pakistan. She often said that we are far behind in education. We did not give priority to IT while India adopted modern technology since independence. That is why Silicon Valley was established. Went ahead Arfa’s dream was to build a DG Con Valley in Pakistan like Silicon Valley in India, which would be inaugurated by Bill Gates. But the dreams of this intelligent girl remained unfulfilled and she passed away. No, but his name is well known to every child in Pakistan, but he seeks to know about Arfa’s deeds.

Punjab Chief Minister Mian Muhammad Shahbaz Sharif, while saying that Arfa Karim’s dreams will not be shattered, renamed the technology park under construction in Lahore as “Arfa Software Technology Park”. Also named after him whose special guest was Arfa Karim’s parents while Karachi IT Center was also named after “Arfa Karim”. A commemorative stamp has been issued in the name of Arfa Karim by the Postal Department.

Who says that if death comes, I will die,

I am a river, I will go down to the sea

As far as naming institutions is concerned, it will definitely refresh Arfa Karim’s memories, but the real thing is Arfa Karim’s dreams that she wanted to put into practice in her life to fulfill those dreams. An organization is being registered in the name of Arfa Karim Foundation (Trust) on the platform of which a search will be made to make Arfa Karim’s dreams come true. But only Arfa Karim’s parents are responsible for making these dreams come true. Or not at all because for this purpose a lot of capital, computer technology and information technology experts will be needed, so the entire Pakistani nation, the government of Punjab and the government of Pakistan will have to participate in a real sense because Arfa’s dream is to make Pakistan a world. Was also to introduce on the map of Pakistan as a great information technology expert country and the Pakistani children who are still suffering from centuries old education system and mental obsolescence.The victims had to be taken out of the abyss and shown flying through the heights like Iqbal’s Shaheen through computer technology.