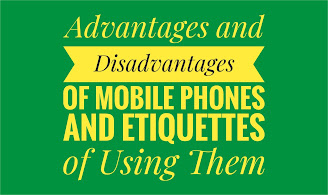 It is said that the need for a gift has become a necessity of life.  The status of the mobile phone is in fact that of the sword of the dagger, the legitimate and illegitimate use of which is at the personal discretion of the mobile holder.  It is now his responsibility to use it properly and appropriately but today unfortunately most women and men seem to be acting irresponsibly.
As a result, the advantages and disadvantages of mobile phones outweigh the disadvantages.  The advantages and disadvantages of mobile phones are discussed in some detail below.  Benefits of Mobile Phones Mobile phones are a great blessing in the sense that its benefits and advantages have brought about many significant changes in human life and it has led to many conveniences for human beings.
Thanks to this, distances have been widened. Trade transactions have accelerated, which has also increased the pace of economic growth.  People who used to communicate with their loved ones hundreds of thousands of miles away for weeks or even months later by postage or by telephone are now in touch almost all the time through mobile phones.
ADVERTISEMENT

English Essay on Future of Pakistan

English Essay on Future of Pakistan Pakistan, a country that has always been an important part of world affairs. A...

Essay on Pakistan In English

Why is life so short?