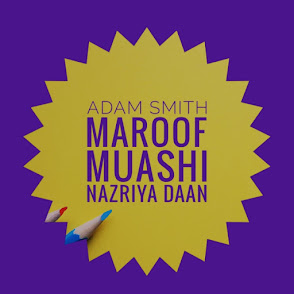 Adam Smith, a leading figure in the development of economic theory, was born in 1723 in the Scottish town of Kirkcaldy.  In his youth he entered Oxford University.  From 1751 to 1764 he was a professor of philosophy at the University of Glasgow.  During this time, his first book, Theory of Moral Emotions, was published, which gave him a prominent place among the scholars.
However, his everlasting fame depended on his great work, “Researching the Nature and Causes of the Wealth of the World,” which came to light in 1776.  It immediately caught the attention of experts.  For the rest of his life, he gained fame and respect from her.  Died in Kirkcaldy in 1790.  He lived a single life.  Adam Smith was not the first to study economic theory.
Nor did he invent most of the well-known theories, but he was the first to offer a comprehensive and systematic theory of economics.  Which, of course, made the video an overnight sensation.  For this reason, it is fair to say that “world wealth” is the starting point for modern knowledge of political economy.
One of the effects of this book is that it corrects many misconceptions of the past.
Smith rejected the old business theory, which insisted on the usefulness of a state with vast gold reserves.  The book also refuted the statesmen’s view that land is the real wealth, instead Smith insisted on the basic importance of labor.  It pushed for as much increase in production as possible, which is possible only through the division of labor.
It also examined all government stereotypes and irregular restrictions that hindered industrial development.  Wealth The basic idea of ​​the United Nations is that the seemingly scattered open market is a self-sufficient system, which begins to produce the kind and quantity of goods that people need and that are in high demand.  For example, we assume that the supply of a desired item is low.
Naturally, the price will go up. As the price goes up, so will the profits of its creators.  Due to this high profit, manufacturers will create more and more of this sector.  This increase in production will eliminate the real shortage.  In addition, increasing supply will bring down the price of the commodity to its original level due to competition among different manufacturers, which is actually equal to its production cost.
No one has helped society to end this scarcity, but the problem has been solved. In Smith’s words, everyone is “just looking out for their own interests,” but they are “pursuing such a goal because of some invisible force.”  Which is not itself a component of its intent.  In order to achieve his own goals, he usually plays such an effective role in the betterment of the society, as it may not be possible for him even when he wants to do so on purpose.
(Wealth of Nations, Volume IV, Chapter II) This invisible force becomes helpless if free trade competition is restricted.  Smith was in favor of free trade.
He strongly criticized the multi-revenue system.  His main criticism was the government’s undue interference in business and the free market.  Such interventions almost always affect economic efficiency and lead to inflation.
Smith did not invent the “Lasissez Faire” correction.  However, his role in spreading the idea was the most important. Some people think that Adam Smith was just a supporter of the business community.  However, this idea is not correct.  He repeatedly objected to business monopolies and called for their abolition.  Nor was he devoid of real business.
Below is a special quote from Wealth of the United Nations: “People in the same sector rarely meet, while their conversations lead to a conspiracy against the people or a strategy to increase prices.”  So with this virtue, Adam Smith presented his economic ideological system in such a coherent way that in a few decades the old economic ideological schools of thought were abolished.
In fact, all of his important points were summed up by Adam Smith, and his shortcomings were regularly exposed.  Smith’s followers included important economists such as Thomas Malthus and David Ricardo, who defined and modified his system without changing the basic concepts and gave it the form known today as classical economics, although in modern theories of economics.  It has added new concepts and methods.
In the United Nations, Smith also predicted Malthus’s views on overpopulation.  However, Ricardo and Karl Marx insisted that population pressure did not allow wages to rise above normal economic levels.
(This is called the so-called iron law of wages.) Smith explained that wages also increase as production increases.
In the same way, events proved that Adam Smith was right on this point, while Ricardo and Marx were wrong.  Regardless of the question of the validity of Smith’s point of view or its impact on later ideologues, the important question is what kind of impact it had on legislation and government strategies?  The wealth of the United Nations was written very clearly.  Government non-interference in business and trade affairs, low tariffs and its approach to free trade had a profound effect on government strategies during the nineteenth century.
These effects can still be felt today.  Economic theory has undergone many changes since Smith, and some of his theories have become obsolete.  It is not difficult, however, to downplay the importance of Adam Smith.  But the fact is that he is the one who made economics a systematic science.  In this sense, he is one of the most important figures in human intellectual history.
SendShare234Tweet146Pin53Send