A statue of Ajab Khan Afridi and our new generation

A statue of Ajab Khan Afridi and our new generation 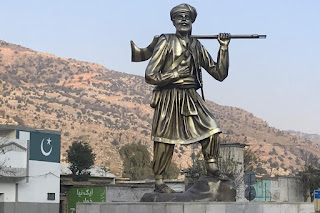 There is a statue on the side of the road from Kohat to Peshawar which has been covered for some time. Not metaphorical, the real veil, under which it was not known what was hidden.

Whenever we caught sight of him during a trip to Peshawar, we wondered who he was and passed by. Then when I had to come and go to Peshawar again, I would see what it was. Then one day the veil was removed from the statue. But it is still not clear who this statue is, which has been erected here in front of the tunnel in Dara Adam Khel. With which a turban or Shimla is also installed. But we will pick up the pen again on Shimla, first, let’s do the history of this statue.

One day while traveling, an old man told us about this statue and we felt sorry for ourselves that there is great historical truth behind this stone statue. Maybe it’s because history is hidden from us.

Now let us tell you that this statue belongs to a historical figure Ajab Khan Afridi who fought against British imperialism in Darra Adam Khel in 1923 and this battle intensified at that time. When Ghazi Ajab Khan started attacking the British military cantonment and other centers in Kohat.

They removed heavy weapons from the cantonment as well as killed many British soldiers, which angered the British intelligence agencies and Ajab Khan Afridi.

To avenge his mother’s abuse, Ajab Khan Afridi attacked the house of a British officer in Kohat one day and abducted Miss Ellis. When the girl’s mother screamed, they killed her and kidnapped Miss Ellis, killing the British on guard.

All the British were amazed at how such a big event could have happened by entering such a tight guard.

Ajab Khan Afridi stayed with Miss Ellis for 10 days in a cave in Kotal Pahar, Kohat. He then went to Afghanistan and sought refuge with the government there, which along with the asylum also gave hundreds of acres of land in Mazar-e-Sharif to Ajab Khan Afridi. The then British government put the price of Ajab Khan Afridi’s head at one lakh rupees (which now amounts to crores).

The British government was so impressed with this kind of treatment that they said that if Ajab Khan Afridi had not killed Alice’s mother, they would have granted amnesty and reward. Our youth are unaware of the fact that the stories of our nation’s heroes are part of history.

In 1985, Miss Ellis came to Dara Adamkhel with official protocol and went to Ajab Khan Afridi’s house and the shelter where Miss Ellis lived, and she cried a lot.

There has been a single film on this subject in Pashto and then at one time this story has been a part of our curriculum but then how and why this story disappeared from our textbook. However, it is our duty to acquaint our new generation with the deeds of celebrities.

Anyone who has thought of erecting a statue of Ajab Khan Afridi on the Kohat-Peshawar road beyond the Kohat tunnel deserves credit.