The 49th martyrdom anniversary of Rashid Minhas, a young Pakistan Air Force pilot and recipient of the Haider Medal, is being commemorated today. 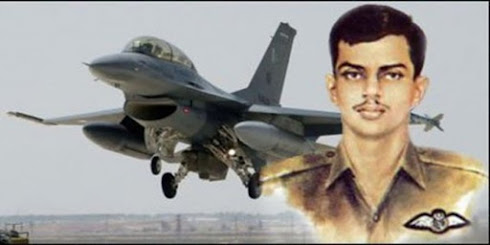 August 20 is the day of martyrdom of Rashid Minhas, a veteran officer of Pakistan. Today, Janshari’s unforgettable chapter became a money in the history of the country. Today, the nation is saluting this brave son for his unparalleled sacrifice and remembering the great moments of martyrdom.

Rashid Minhas was born on February 17, 1951, in Karachi. Senior Cambridge from St. Patrick’s School, Karachi. Rashid Minhas was impressed by the bravery and military prowess of the Pakistan Air Force officers in the 1965 war, after which he decided to join the Pakistan Air Force. He joined Risalpur Academy as a flying cadet at the age of just 17. B.Sc. in English, Air Force Law and Aviation in February 1971. S. What did

Rashid Minhas became a pilot officer in August 1971 and on August 20 flew his third solo flight to fly a T33 jet trainer. As soon as he boarded the trainer jet, his instructor Safety Flight Officer Mati-ur-Rehman signalled and entered the cockpit and turned the plane towards India. Rashid Minhas contacted Maripur Control Tower. The tower was instructed to protect the plane from hijacking at all costs, after which the plane was shot down after five minutes of resistance.

Imagining Iqbal’s Shaheen, Rashid Minhas was devoted to the love of the homeland and eager for martyrdom, and it was this passion that elevated him to the status of a martyr at a young age when he thwarted his instructor’s conspiratorial intentions.

Rashid Minhas preferred to be martyred on the soil of the homeland instead of being helpless at the hands of the enemy and thwarted the intentions of the enemy even before the secret reached India.

It was a great momentary decision that took Rashid Minhas to the heights of martyrdom and made an unforgettable chapter of greatness and repair on the dust of the Holy Land. For this timeless feat, he was awarded the highest military honour, the Nishan Haider. Pakistan Air Force officer Rashid Minhas Shaheed is the youngest martyr to receive the highest military award, Nishan Haider.

Rashid Minhas had given a blunt answer to the enemy by sacrificing his life for the sake of his dear homeland at the age of only 20 years.